So how many stomachs does a cow have? Technically speaking, the answer is only one. However, a cow’s stomach is divided into four different compartments, meaning that for all practical purposes a cow has four stomachs. Cows are a part of a group of animals called ruminants, which are distinguished by the fact that their stomachs are separated into four chambers, each with its own unique purpose.

Why So Many Stomachs? 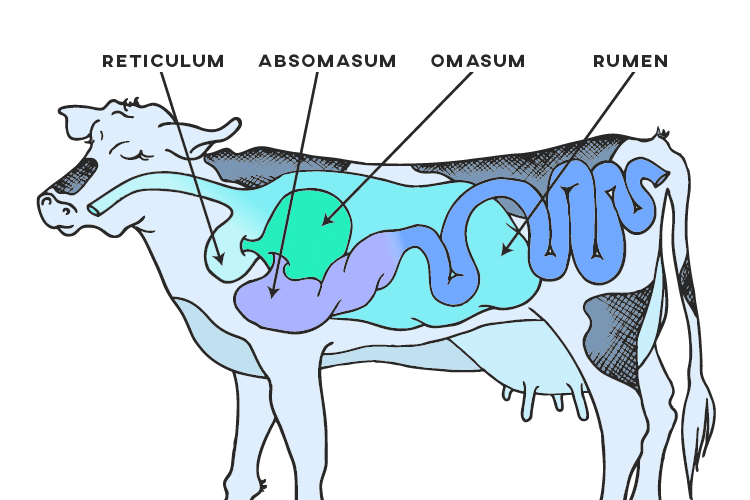 Why do cows and other ruminants need so many stomachs when the rest of the animal kingdom gets by with just one? The answer is that the plants these animals eat are so tough and coarse that it takes a special digestive system in order to break them down. To better understand what the four stomachs in a cow do and why they are necessary, let’s take a look at each one individually:

The first and largest of a cow’s stomachs is called the rumen. Food travels here first where bacteria, fungi, and protozoa work to start breaking down the tough, fibrous plant material that the cow ingests. The rumen is able to digest most of the cell wall of the plant, and the nutrients from this process are released into the animal.

After the cow’s food passes through the rumen, it goes into the reticulum. Here, it is further broken down, but in addition to this, the reticulum is also responsible for collecting foreign objects that cannot be digested and preventing them from passing through the digestive system. The cow is also able to cough up food from the reticulum called cud. The cow will then chew this cud a second time more completely than it chewed the grass when it first ate it. This aids a great deal in the digestive process.

The next of a cow’s stomachs is called the omasum. In this stomach, many folds of skin increase the surface area of the stomach. This makes the omasum good for absorbing water and other liquid nutrients.

The fourth and final stomach a cow has is the one most similar to the stomach that humans and most other animals have. In the abomasum, stomach acids are used to break down the cow’s food, though these acids are less acidic than the acids in the stomach of a human being since cows do not have to digest meat.

Other animals which have multiple stomachs include bulls, goats, sheep, camels, and buffalo.

Bulls, which are male cattle, have the same stomach as cows except for the fact that none of the nutrients digested in their stomachs go into the production of milk like it does with a cow.

Like cattle, goats also have four stomachs. While goats are more picky about what they eat than what pop culture portrays them as (tin cans aren’t really part of a goat’s diet) they still will eat a lot of things such as thorns, twigs, and other woody plant material that is even more difficult to digest than grass. Because of this, goats will very often chew their cud in order to break the food down to the point where it can be digested.

Although camels chew their cud and have multiple stomachs, they are not a true ruminant. Instead of having four stomachs, camels have three. They are absent the omasum which is found in other ruminants.

A Buffalo – which is very closely related to a cow – has the same four stomachs and digestive system as cattle.