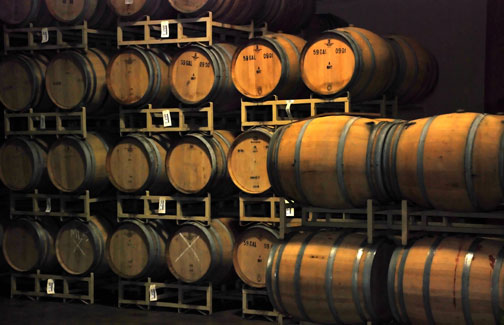 You hear it tossed around casually – a buttload of this, a buttload of that. It might be coming from your twelve-year-old brother or just another juvenile acquaintance, but more than likely the speaker doesn’t know that their silly word might actually carry some historic meaning. Could they really have a buttload of stuff? They could.

A Buttload is an Actual Unit of Measurement

Okay, the measurement isn’t actually a buttload. It is the “butt” that carries historical measuring significance.  From the Italian word botte, the word for cask or barrel, the word butt came to into being as a unit to measure wine and other alcoholic beverages. In case you were curious, a butt has traditionally considered to be equivalent to 2 hogsheads. Still confused? We are, too.

So a Buttload is Two Hogsheads?

The word hogshead dates back to Late Middle English, the period between 1350-1469. So you can thank our English-speaking ancestors for their creativity or perhaps lack thereof. Technically speaking, a hogshead is simply a large cask (and one that may have had some resemblance to a hog – thus the not so clever but oddly entertaining name). The use of the hogshead as a unit of measurement, on the other hand, was standardized by British Parliament in 1423, around the same time as its other measuring friends the tun, pip, and firkin (yes, those were real units of measurement). As such, it became a way to measure a not so precise volume of liquid, anywhere from 63 to 140 in today’s US gallons. Wait, US gallons? Is there more than one type of gallon? Simply answered, yes.

What is a Gallon?

When looking all the way back to the 14th century, the gallon becomes a more complex concept than one would have imagined. There are the US gallons we are most familiar with (think a gallon of milk). But before the US gallon, there was the wine gallon, the pre-1824 imperial gallon, and yes, the post-1824 imperial gallon. The US even decided to throw in the US dry gallon into the mix.  That’s not all when it comes to gallons, but enough of that, we have more funny terms of measurement to discuss!

In addition to being equivalent to 2 hogsheads, the butt also a half tun, which is a large cask with the volume of approximately four standard wine barrels. Upon further calculation, that butt roughly translates into 475-480 liters (depending on whether you’re using pre-1824 liters or post-1824 liters). Not into the metric system? That’s about 126 US liquid gallons. That’s a lot of wine.

Where Did the Buttload Go?

The use of butt as a unit to measure wine has fallen out of favor as have the butt-size casks used to measure and transport the beverage. But its legacy carries on  in the form of the word buttload to informally, and perhaps immaturely, denote a sizable amount of something. So when you have a buttload, you have a lot of booze and quite a bit of linguistic history!

For other weird units of measurement, check this out.