Have you have ever looked up at the sky on a clear, sunny day and wondered what makes the sky blue? Why not purple? Or green? You are not alone in this pondering as the weasel has pondered it as well. Lucky for you, the weasel has done his research.

As we know, the sun provides us each day with light. But did you know that this light is not in fact as colorless as it appears? The light of the sun is actually energy, which is a special mix of many colors or light wavelengths. This mix is made most obvious through a prism. The mist of a waterfall or the air around us after it rains can all act as a prism by splitting that mixture of colors into a visible spectrum. That spectrum is commonly known as a rainbow. Sadly, there is no scientific evidence that prism also conjures up a pot of gold. What we know is that the prism (or water molecules in the case of a waterfall or after rainfall) serves as a sorter of those colors, separating each wave of light into the colors we know and love: red, orange, yellow, green, blue, indigo, and violet (also lovingly known as ROYGBIV).

Light is What Makes the Sky Blue (and Orange)

When you look an object, you perceive a color. But what you are actually seeing is a certain color of light reflecting or radiating from that object. Take a red balloon for example. Light is shown upon the balloon, and in response, the balloon absorbs all the colors of the color spectrum (ROYGBIV, anyone?) with the exception of red. By reflecting the red light, the balloon appears red to the human eye. Perhaps we are all now on the same page. But unlike the balloon, air is not a typically considered a tangible object, so what makes the sky blue? 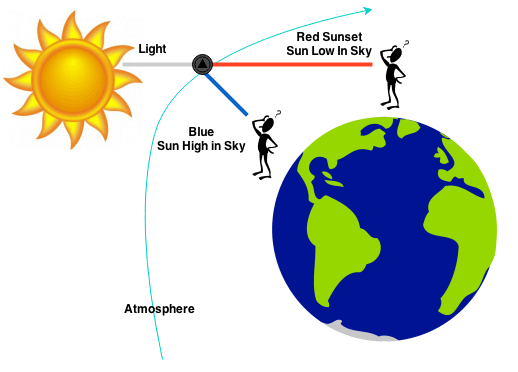 Well, the atmosphere of the Earth is filled with oxygen, nitrogen, carbon dioxide and many other gases. These gases combine to create not only the atmosphere, but a practical prism. When the sun’s multi-colored light enters the atmosphere, the shorter wavelength colors like orange and yellow pass directly through while the blue wavelengths are absorbed by those gas molecules and ultimately scattered across the sky. Similarly to the red balloon of our previous example, the reflection of the blue wavelengths account for our perception of the sky’s color. The process is in essence the same phenomenon that creates stunning orange sunsets.

When the sun is low in the sky, as it is as it sets, the sun’s light has farther to travel to reach our eyes. This distance causes the shorter wavelengths, like the blue, to dissipate and consequently, makes the reds and oranges more visible.

Simply put, it is the magical, yet scientific combination of the the sun’s light, an atmospheric prism, and your location that makes the sky blue.

A more technical and formal explanation of what makes the sky blue requires a lengthy dissertation on light, colors, angles, the size of the gas molecules, and airborne particles. If such a thing interests you, then you may want to see this detailed explanation here. But don’t say the weasel didn’t warn you.